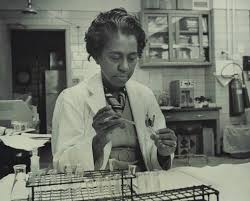 Marie M. Daly was a biochemist. She is known for being the first African American woman to receive a Ph.D. in chemistry in the United States.

Marie M. Daly was also a researcher and a professor. She researched and worked on the composition and metabolism of components of the cell nucleus, how proteins are constructed in the body, cholesterol, clogged arteries and the heart, the effects of sugars, hypertension and other studies. She taught biochemistry courses at the College of Physicians and Surgeons of Columbia University and was later a professor at the Albert Einstein College of Medicine.

In addition, she developed programs to increase enrollment of African American students in medical school and graduate science programs. She started a scholarship for minority science students at Queens College in honor of her father. She was inspired early on by her father’s love of science. Unfortunately, due to economic circumstances, he had been forced to drop out of Cornell University as a young man where he had been working towards a degree in chemistry.